From the voice of others... 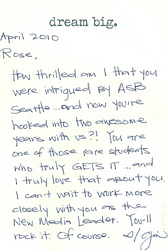 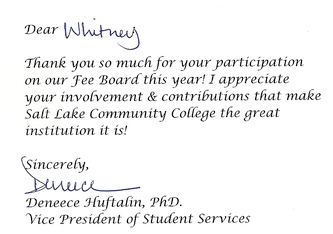 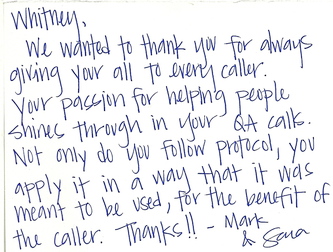 Click the images below to see a larger view of the recommendation from Gail Jessen,  Director of The Thayne Center for Service & Learning at SLCC. Below the images is text provided from a separate letter of recommendation written by Kati Lewis my English 2010 teacher who I greatly respect for making us think, learn, and actually develop as people by assigning us to report and write on a public issue that we were passionate about. She was very supportive and, well see the letter... 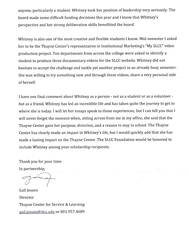 Letter of Recommendation from Kati Lewis

To Whom It May Concern:
I had the privilege of teaching Whitney Rose as a student in one of my English 2010 classes this semester. In this class, we covered five research-writing genres (report, position papers, proposals, instructions, and profiles). Learning about and writing in five genres can be intimidating for any student. Instead of feeling intimidated by the amount of work this composition class required, Whitney viewed it as a challenging learning opportunity. She never missed a deadline for class and online assignments. Whitney often went above and beyond what was required of her in class and online – not because she wanted to “outshine” other students; she simply wanted to make sure that she understood what each genre entailed and that she was adapting her research and writing to each genre’s purpose.
Moreover, she helped her peers tremendously with their own research and writing in the numerous and extensive peer reviews she conducted for them. The constructive feedback she offered her peers often helped them learn more effective strategies for writing research papers. This dedication to helping her peers learn while she learned was not simply to earn a grade for peer reviews, but to sincerely engage in the learning community that she is a part of both in the class and on campus. Her participation in the campus Service Council is yet another example of her dedication to helping make class and student life better for her peers (and the environment). As part of the council she was successful in re-instating a college-wide recycling program that had been defunct for year. It will be reinstated in the fall of 2010. In addition to this recycling program, she is currently working with Scott Byington to organize an on-going recycling program with the SLC Marathon because they do not have one.
On another note, Whitney’s abundant desire to help others came through in the topic she chose to research and write about this semester: the humanitarian crisis in Haiti. Her purpose for focusing on Haiti was to create awareness for suffering Haitians and to propose feasible solutions for aid distribution problems. Several of her peers were so moved by what she wrote that they began their own research on aid distribution problems. Some of these peers even changed their research focus to Haiti and/or other regions in crisis because they were inspired by Whitney’s desire to act when others are suffering.
Finally, in my almost 5 years of teaching on the college level, I have never had a student so dedicated to public service as Whitney Rose. This came through every day in class, can be seen in her numerous activities on campus and in the community, and in her writing. The Carpe Diem Foundation would be represented well by having Whitney Rose as one of their scholarship recipients. The scholarship would give her the opportunity to finish school and focus on her desires for public service on the local, national, and international levels.
Sincerely,